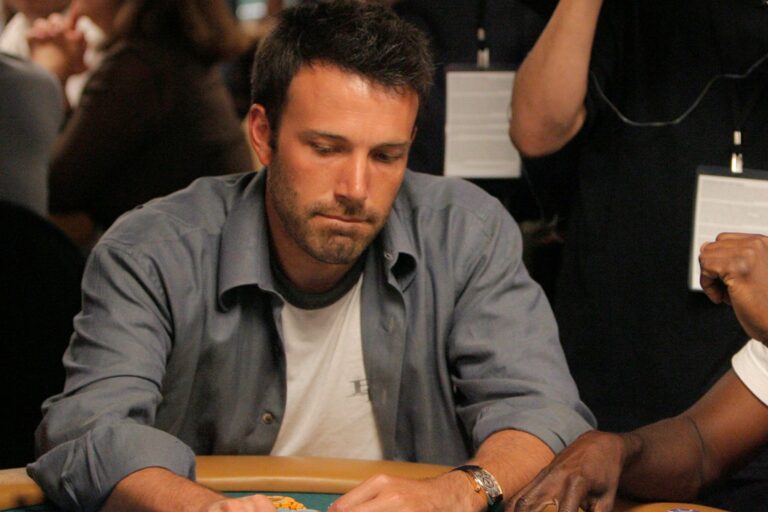 When it comes to gambling, you have to know when to hold ’em and when to fold ’em, as they say. That’s something that celebrities like Ben Affleck, Matt Damon (who you might remember starred in the poker-focused movie “Rounders”), Tobey Maguire, or Leonardo DiCaprio could tell you. All four of those famous figures are pretty savvy when putting their money on the line in a game of poker in real life. Granted, that doesn’t mean they always walk away as winners (legally speaking).

In 2011, ABC News reported that Maguire and DiCaprio were “part of high-stakes poker games where tens of thousands of dollars regularly exchanged hands among Hollywood’s biggest stars.” While Affleck and Damon took part in the action as well, it was Maguire — “who frequently came out on top” — and found himself the subject of a lawsuit due to the “underground Texas Hold ’em matches” which were allegedly “played with some money taken in [a] Ponzi scheme.” And that’s part of the star’s seemingly shady gambling-related past.

Granted, not everyone who shows up to play has legal issues. Affleck has won quite a bit of money over the years thanks to his ability to bet, bluff, and take home big pots above-board, that is. Read on for more on the actor’s poker skills.

Before Tobey Maguire found himself in trouble due to his gambling ways, he faced Ben Affleck in 2004 at a significant three-day poker tournament in California, according to Reuters (via People). Affleck beat almost 90 other players who showed up to take the top spot while also taking the big prize. So, what did Affleck end up winning? Well, along with earning a seat at the World Poker Tour Championship, his first place spot nabbed him an impressive $356,400. Granted, that’s a small fraction of the star’s overall (seriously massive) fortune, but clearly, he deserves a place at the poker table!

“This is not likely the last time you’ll see Ben Affleck at one of our final tables,” Commerce Casino State Poker Championship spokeswoman Nancy Friedman said, per People. She added, “He has become a respected member of the poker elite and continues to work to improve his game.”

These days, Affleck is still involved in poker, sometimes even for a good cause. For instance, during the coronavirus pandemic in 2020, Affleck teamed up with his fellow poker-playing pal Matt Damon to put together a celebrity game that raised around $1.75 Million for Feeding America, which People noted is “the country’s largest hunger-relief and food rescue organization.” Adam Sandler was there to pay and play, as was Jason Bateman, Adam Levine, Bryan Cranston, Sarah Silverman, Jon Hamm, and Tobey Maguire.

Shortly into Matt Damon’s worst acting performance in many years, Ben Affleck can be seen staring up at the screen depicting the cards that would play along the WSOP drama. It’s an iconic World Series of Poker moment that can never be forgotten once seen.

As you could probably hear, thirty seconds in, Affleck is mercilessly mocked with the commentary:

“Ben, what are you still doing here? Jennifer Garner’s waiting for you at home.”

Of course, since the pair’s divorce in 2017 was finalized, that hasn’t been the case, but this week, Affleck was spotted in a casino playing some poker amid what he called a slip in terms of his recent sobriety.

Ben Affleck was filmed a little off kilter as he attempted to steady himself in the street. But reporters bolstered this story to include him playing poker while that should hardly be news in and of itself – he’s an adult after all – and was endangering no one but himself.

Although the severe nature of Affleck’s alcohol addiction is by far the most critical aspect of his life, why is poker often associated with poker?

After speaking with the parents of a prominent poker player who shall remain unnamed a couple of years ago. In doing so, it was found out precisely what worried them about a casino – and how wrong they were. The perceived seedy nature and underground gambling den feel they suspected it was nothing of the sort. Instead, they found a venue with security guards, strict gambling, drinking and behavior protocols, and CCTV throughout. There wasn’t a corner of the cardroom that wasn’t on camera, so they eventually went away trusting their child a lot more. As they said, there were so many worse places they could be: A nightclub, outdoor concert, all-night race or the streets. Get your game right online at https://www.casinoscout.io/online-pokies/.

According to sources, Affleck sat down with $20,000 and left shortly afterwards with $21,500. It’s not like he blew the budget of his Batman movies. Admittedly, those movies bombed harder than Jägermeister, but still.

Who knows what state Affleck was in playing poker? Maybe he went there wholly sober and, bored with the table, decided to leave and go home. Maybe he arrived slightly inebriated, played a little poker, sobered up a bit and left while he was ahead. That’s the kind of judgement and perception we might expect from the co-star and co-writer of Good Will Hunting we saw win an Oscar for the Best Original Screenplay with Matt Damon:

While Affleck may have stronger focuses in his life, whether poker is positive or negative to him seems moot. It could be either, but why is it brought into the report of his slip in his recovery from alcohol addiction? It is hardly likely to be relative. He didn’t drink because of poker, nor did poker influence his drinking, certainly in a negative way. He went to a poker game. He enjoyed a game of cards. He went home. Millions of Americans do it every night.

Affleck is a free man and one who, back in the day, won the $10,000-entry California State Poker Championship back in 2004 in Los Angeles. Affleck won $356,400 in that event, outlasting players like John Esposito and Ty Nguyen at the final table.

As Ben Affleck said in his Oscar acceptance speech with Matt Damon, “Losing would suck and winning would be scary.” Let’s hope that doesn’t change the former Batman actor’s attitude to playing poker again. We’d love to see him back at the felt.